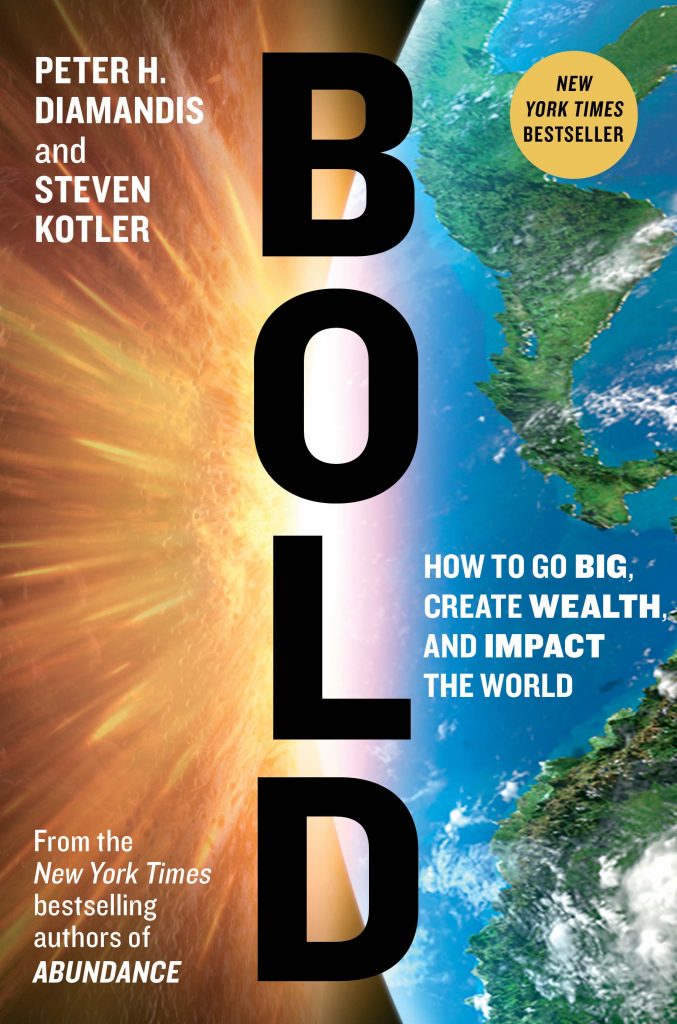 Anything that becomes digitized hops on Moore’s law of increasing computational power.

… the most important telltale factor is the development of a simple and elegant user interface — a gateway of effortless interaction that plucks a technology from the hands of the geeks and deposits it with the entrepreneurs.

Take ShotSpotter, a gunfire detection technology that gathers data from a network of acoustic sensors placed through the city, filters the data through the algorithm to isolate the sound of gunfire, triangulates the location within ten feet, then reports it directly to the police. The system is generally more accurate and reliable than information gleaned from 911 callers. (the smart way of using sensors)

In the late 1960s, University of Toronto psychologist Locke discovered that goal setting is one of the easiest ways to increase motivation and enhance performance.

Be setting big goals, we are actually helping ourselves achieve those big goals.

«The day before something is truly a breakthrough, it is a crazy idea.» Burt Rutan

Trying out crazy ideas means bucking expert opinion and taking big risks. It means not being afraid to fail. Because you will fail. The road to bold is paved with failure, and this means having a strategy in place to handle risk and learn from mistakes.

Once we pay people enough so that meeting basic needs is no longer a constant cause to concern, extrinsic rewards lose their effectiveness, while intrinsic rewards — meaning internal, emotional satisfactions — become far more critical.

Where GoogleX deviates from traditional skunk is with the size of the goals they’re setting. Moonshots, by their definition, live in that gray area between audacious projects and pure science fiction. Instead of mere 10 percent gains, they aim for 10x improvements.

While 10x improvement is gargantuan, Teller has very specific reasons for aiming that high. «You assume that going 10x bigger is going to be ten times harder» he continues, «but often it is literally easier to go bigger. Why should it be? It doesn’t feel intuitively right. But if you choose to make something 10 percent better, you are almost by definition signing up for the status quo — and trying to make it a little bit better. That means you start from the status quo, with all its existing assumptions, locked in the tools, technologies, and processes that you are going to try slightly improve. It means you are putting yourself and your people into a smartness contest with everyone else in the world. Statistically, no matter the resources available, you are not going to win. But if you sign up for moonshot thinking, if you sign up for making something 10x better, there is no chance of doing that with existing assumptions. You are going to have to throw out the rule book. You’re going to have to perspective-shift and supplant all that smartness and resources with bravery and creativity.»

Most critically here, this 10x strategy doesn’t hold true just for large corporations. «A start-up is simply a skunk works without the big company around it.» says Teller.

At GoogleX, this mitigation comes from  as especially vicious feedback process. «We try a lot of things,» says Teller, «but we don’t allow most of them to continue. At several different stages, we end most projects. In the end, it looks like we are geniuses — but that’s not what’s going on at all.»

Applying this idea in our daily life means breaking tasks into bite-size chunks and setting goals accordingly. A writer, for example, is better trying to pen three great paragraphs at a time, rather than attempting one great chapter.

Think challenging yet manageable — just enough simulation to shortcut attention into now, not enough stress to pull you back again.

Our final trigger, Always say «Yes, and … ,» means interaction should be additive more than argumentative. The goal here is momentum, togetherness, and innovation that comes from ceaselessly amplifying one another’s ideas and actions. It is a trigger based on the first rule of improv comedy.

He shared stories about how close the space inventors, engineers, and visionaries of the 1940s and 1950s were to one another. It was the power of their collective friendship, knowledge, and vision that ultimately gave a birth to the Apollo Program. The idea of such a tight network got us dreaming about creating an International Space University.

A second lesson that we learned on our way to founding the university: the critical importance of staging your bold ideas.

I’ve come to think of making a stone soup as the only way an entepreneur can succeed. The stones are, of course, your big bold ideas. The contributions of the villagers, the capital, resource, and intellectual support offered by investors and strategic partners. Everyone adds a small amount to your stone soup in fact helping to make your dreams come true.

Hagel and colleagues have made quite a study of passion, 18 coming to define the version that best serves individuals and organizations as the passion of the explorer. «There are people who see a domain, but not the path. The fact that the path is not clearly defined is what excites them and motivates them.»

«If anything can go wrong, fix it! (To hell with Murphy)» Peter’s Law.

Start collecting mind hacks by examining your own life  and seeing what strategies consistently worked along the way. Turn those strategies into your laws.

When someone says no, it’s often because they’re not empowered to say yes. In many organizations , the only person who can say yes is the one atop the food chain.

«The important thing is to start, to lay a plan, and then follow it step by step no matter how small or large one by itselft may seem» Charles Lindbergh.

«The usual circle of beginning a company begins with a lot of optimism and enthusiasm. This lasts for about six months, and then reality sets in. That’s when you learn a lot of your assumptions were false, and that the finish line is much further away than you thought. It is during this period that most companies die rather than scale up.» Elon Musk.

«Physics training is a good framework for reasoning. It forces you to boil things down to their most fundamental truths and then connect those truths in a way that lets you understand reality. That gives you a way to attack the counterintuitive, a way of figuring things that are not obvious. When you are trying to create a new product or service, I think it is critical to use this framework for reasoning. It takes a lot of mental energy, but it is still the right way to do it» Elon Musk.

«Outcomes are usually not deterministic , they are probabilistic. But we do not think that way. The popular definition of insanity — doing the same thing over and over and expecting a different result — that is only true in a highly deterministic situation. If you have a probabilistic situation, which most situations are, then if you do the same thing twice, it can be quite reasonable to expect a different result» Elon Musk.

How Elon Musk chooses which streams to explore depends on the relationships between those probabilities and the importance of his objective. Even if the probability of the success is fairly low, if the objective is really important, it is still worth doing.

«Protecting downside is critical. Make bold moves but make sure to have a way out if things go wrong.» Richard Brancon.

«And you could build something online that literally could not be built in any other way. You couldn’t have a physical world bookstore or a paper catalog with millions of different books.» Jeff Bezos

«How do we decide what is really important to work on? I like to call it the «toothbrush test». It is simple: Do you use it as often as you use your toothbrush?» Larry Page.

«You would think that as we do more ambitious things, our failure rates would go up, but it doesn’t really seem to. The reason, I believe, is even if we fail in doing something ambitious, you usually succeed in doing something important. I like to use example of our first attempt to crate AI back in 2000. We did not succeed, but we did come up with Adsense.» Larry Page.

What most people want to hear is  why your product will improve their life — why it is significant, cool, and important to them and the world. Think solutions and improvements, not explanations or specifications.

Even the most technical of  ideas needs to be framed inside a greater narrative. If you can’t come up with one, tell the story of how and why you came to create the product you are selling.

When you launch above the line of super-credibility , people instantly accept your project as real and believe in their hearts that it is going to work.

The major mistake most people make in crowdfunding is their assumption that simply posting your campaign on platform is enough. You, not the platform, is responsible for driving traffic to your page. More traffic you drive — more money you raise.

… is what I call the Law of Niches, the idea, quite simply, that you are not alone . This is one of the most telling features of the web — the somewhat humbling fact that no matter what addball notion you are deeply passionate about, well, there are plenty of folks who share the same passion. (nich sites with communities)

If your community can provide a legitimate release valve for peoples incredibly frustrated passion, you are unleashing one of the most potent forces in the history of the world.

People join communities for the ideas, they stay for the emotions.

Here are few examples of common types of market failures.